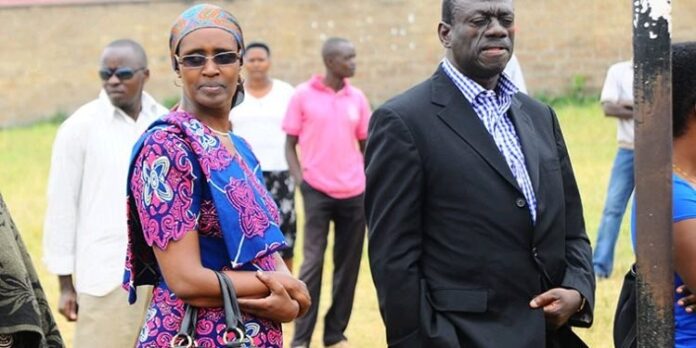 KAMPALA: UNAIDS executive director, Winnie Byanyima, has called for the release of her husband Dr Kizza Besigye who is on remand at Luzira prisons.

Besigye was arrested on May 21 at Arua Park downtown Kampala for protesting against high commodity prices and charged with inciting violence.

He was granted Shs30m bail and his sureties bonded Shs70m by Buganda Road Magistrate, Siena Owomugisha, which he refused to pay citing unfairness.

He instead opted to go to Luzira prison on remand where he will remain until June 16, the next court hearing.

“#freebesigye. He is innocent,” his wife tweeted on Friday.

She was also vocal in calling out police during the siege of their home in Kasangati when Besigye announced fresh walk-to-work protests.

Byanyima called on police to leave their home and give her husband privacy, a feat which was achieved by Uganda Human Rights Commission (UHRC) Commissioner, Crispin Kaheru.

Forum for Democratic Change (FDC) party in a tweet on Thursday, June 2, shared a letter its founding party President penned on the same day in 2016 when he was in Luzira Prison on treason charges after swearing-in as President.

In a letter to friends and activists dated June 2, 2016, Besigye said he is well and by the grace of God.

“I convey salutations to all of you. I wish you a happy Martyrs’ Day. We shall overcome. Reman strong,” Besigye wrote.

“Today, after six years, he’s in Luzira charged with Inciting violence. Hang in there Dr, we must recover this country,” FDC tweeted.

Besigye’s pressure group Peoples’ Front for Transition – Uganda has been sharing messages calling for his release as well as protests by his supporters.

Besigye speaks to my heart

Byanyima, who fell in love with Besigye during the National Resistance Army/Movement war of 1981-1986, said the retired doctor speaks to her heart.

Nation Media Group journalist, Daniel Kalinaki, in his book “Kizza Besigye and Uganda’s Unfinished Revolution” suggests the lovebirds met after a bush war fighter, Maj. Victor Bwana, broke his spine in a car accident in Kampala and was flown to Paris for treatment.

“He was the only person remembering Maj. Bwana. It really touched my heart that somebody could be so true, so loyal. This is how Besigye won my heart. Nothing else. I am a very basic person; you win me really, on values. You have to speak to my heart. You have to have my values. And he did. That is how I fell in love with him. I admired the selflessness, the loyalty, the commitment…” he quoted Byanyima as saying.

According to Byanyima, the two men in her life who put her on edge are Besigye and their son Anselm Besigye.

She has always been in his corner, supporting him and standing with him.

Meanwhile, Byanyima dismissed baseless allegations that she was serving President Museveni’s interests at the United Nations.

One Dr. Senyonjo Lamech (@DrSenyonjoLam) tweeted: “Her candidature was endorsed by Museveni (NRM), justification that she’s serving the World on behalf of NRM and Uganda at large and we are proud of her.”

In response, Byanyima said: “You are misled and misleading others. I do not serve the UN on behalf of Uganda or any government. Please read the oath I swore before the UN Secretary-General.”

The oath reads: “I solemnly declare and promise to exercise in all loyalty, discretion and conscience the functions entrusted to me as an international civil servant of the United Nations, to discharge these functions and regulate my conduct with the interests of the United Nations only in view, and not to seek or accept instructions in regard to the performance of my duties from any Government or other source external to the Organization.”

Byanyima clarified that she is guided by UN staff rules and regulations and does not act on behalf of any government.

The Flashlight ug is a website which is strictly specializing in breaking news, Politics, news analysis, business news and Sports.

For breaking news and more information please email us on [email protected] or send us a message on our social media platforms. Like us and follow us to stay updated..