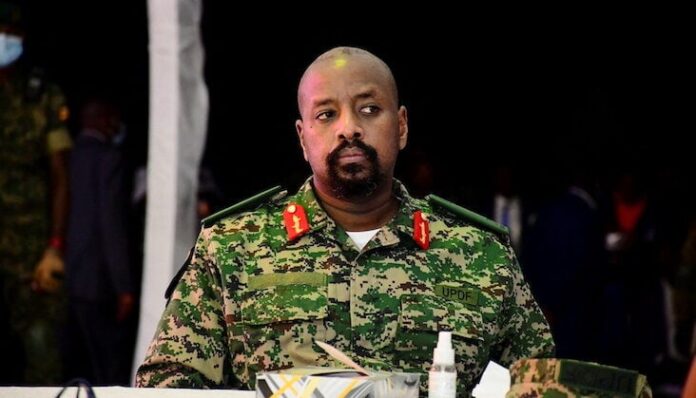 First Son Muhoozi Kainerugaba has yet again set twitter on a blaze after confessing that he wants to take over Uganda’s presidential seat in order to repay his mother.

The 48-year-old senior presidential advisor on special operations as a serving four-star general, through his twitter account on Thursday revealed that the only way, he could re-pay his “boundless mother” is by being the president of Uganda.

“The only way I can re-pay my great mother is by being President of Uganda! And I shall definitely do it!!” Reads Muhoozi’s statement.

Hours earlier before, Gen. Muhoozi shared a photo of First Lady Janet Museveni whom he described as a perfect mother and an angel.

“My mother has always been an angel for me. She is simply perfect! Like most men feel for their mothers!!!” Former commander of land forces tweeted.

However, Gen. Muhoozi’s revelation to be Uganda’s president is directly contradicting with his previous statements where he repeatedly denied intentions to succeed his 78-year-old father, one of Africa’s longest-serving leaders

In a video believed to have been recorded in 2016, while speaking to the press, Muhoozi is clearly heard denying of any ambitions to run for presidency, maintaining that he was very happy serving in the military. Since then, Muhoozi has enjoyed a rapid rise through Uganda’s army ranks.

Muhoozi’s twitter account has of recent stirred mixed reactions among Ugandans and whole of East Africa due to the controversial content published on it and on several occasions government ministries and departments have issued explanations and apologies over tweets sent out by the first son.