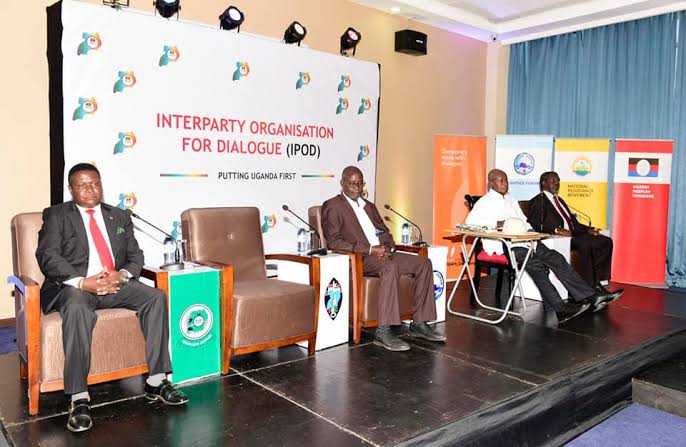 KAMPALA: The Opposition National Unity Platform (NUP) has confirmed it will not be joining the Inter-party Organization for Dialogue (IPOD).

Despite having the second highest number of MPs in Parliament, NUP says it has no plans to join the organization which brings together all parties with representation in the House.

The party on September 2nd wrote to the IPOD Executive Director confirming their decision.

NUP Secretary General David Lewis Rubongoya said in the letter that his party was “not keen on taking part in an exercise which is used as a facade to legitimise an otherwise illegitimate rule.”

He also went on to accuse the platform of denying audience to “serious discussions about the future of our country.”

President Yoweri Museveni in a televised interview yesterday, revealed that he and his government was still open to dialoguing with the NUP like they have with other opposition party.

The President said the opposition party led by Robert Kyagulanyi Bobi had however made a choice not to accept the invitation.

“We are always dialoguing with those groups including Bobi Wine if he wants to,” Museveni told France 24.

“We have invited them through…IPOD, others have come. I didn’t see Bobi Wine, but others came.”

Earlier while opening the 11th Parliament in May, Museveni disclosed that he was talking with two of the country’s traditional parties, namely; Uganda People’s Congress (UPC) and Democratic Party (DP).

The President added that he had even reached out to the Forum for Democratic Change (FDC) which many NRM supporters view as a radical force, and that only the NUP was “dodging” his invitation to dialogue.

According to NUP’s Rubongoya, the party was directly approached in April and later in August this year by representatives from IPOD and its funders from the Netherlands Institute for Multiparty Democracy (NIMD).

These he said, “made an impassioned appeal for the National Unity Platform to join IPOD.”

But after giving it consideration, Rubongoya said a decision was made to turn down the invite.

“Sadly for Uganda, IPOD has been largely instrumentalised by the regime. It has been co-opted and used to legitimise a brutal regime that has no regard or respect for democratic governance,” he said.

“The regime uses it for political gain, far from its intended objective of “strengthening Uganda’s multiparty democracy.”

He noted for instance that hundreds of NUP supporters have been abducted, tortured and even murdered.

“We have taken time to study the discussions that have taken place in IPOD overtime. In our assessment, the regime has turned it into a forum in which Party Principals meet for a cup of tea, followed by a photo opportunity.”

“Serious discussions about the future of our country have been denied audience within the Platform! The National Unity Platform is not keen on taking part in an exercise which is used as a facade to legitimise an otherwise illegitimate rule.”