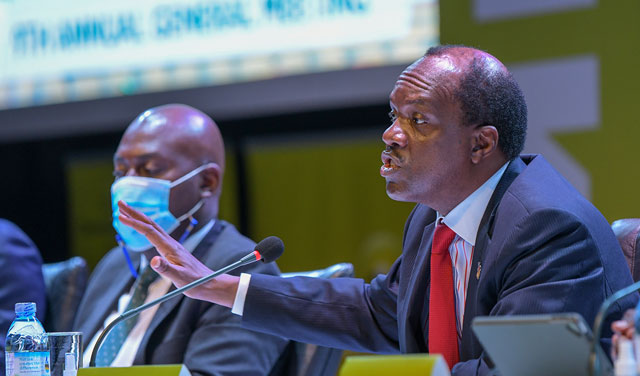 KAMPALA: Vantage Capital Fund Managers Proprietary Limited, an equity and debt company, has revealed that Patrick Bitature borrowed $10m (about Shs36b) from them that has since risen to $34m (about Shs124b) in accumulated interest, and accused the businessman of using underhand methods to default on the loan.

In a statement issued on Monday, 23 May 2022, Vantage Capital Fund said in 2014, Bitature borrowed the $10m to pay off Simba Group’s existing debt and to fund the completion of Simba’s Skyz Hotel.

“Mr Bitature and the Simba Group granted security for the loan in the form of charges over their shares and legal mortgages were registered over certain properties owned by them (security),” the company said.

According to Vintage, when the loan was due for repayment in 2019, Bitature went to court in a bid to dodge the repayment.

“Instead of making efforts to repay the Loan, the Simba Group and Mr Bitature resorted to litigation, claiming that Vantage’s Loan was invalid and signed under duress and therefore Simba, having used the money, did not have to repay it,” they said.

“Unfortunately, such tactics have been employed by Mr Bitature before, both against Vantage and against other Simba Group lenders, including a South African bank. All of the above took place well before the rise of the Covid-19 pandemic,” the company added.

Vintage also revealed that recently, the URSB blocked their attempt to exercise its security rights over Simba Group’s shares.

“Vantage approached the High Court of Uganda to compel the URSB to give effect to its legitimate share charges. The court dismissed Vantage’s application based on a technicality, that the Vantage Partnership in question was not registered in Uganda and therefore lacked the standing to sue or be sued in Uganda. The court did however find that if Vantage was registered, it would have ruled in favour of Vantage against the URSB. The court made no findings as to the validity of the underlying legal agreements,” the company said.

“Technicalities aside, the underlying Loan and Security agreements remain valid. To date, the Simba Group and Mr Bitature have not paid a single cent of their indebtedness under the Loan. The result of not servicing any interest, compounding over 7 years, is that the indebtedness has ballooned to over US$34m,” the company added.

“Instead of making efforts to repay the Loan, the Simba Group and Mr Bitature resorted to litigation, claiming that Vantage’s Loan was invalid and signed under duress and therefore Simba, having used the money, did not have to repay it,”

STATEMENT BY VINTAGE CAPITAL FUND
They said they will not be deterred by the Simba Group’s and Mr Bitature’s “continued abuse of court processes and public institutions, nor by their recent “PR Campaign”, in their ongoing efforts to avoid their creditors and lawful obligations.”

“Vantage will persist in the recovery of its long overdue loan, exercising its rights against the Security if need be. We note that the behaviour of the Simba Group and Mr. Bitature in borrowing money from international lenders and then denying its obligations does not reflect well on Uganda’s international image as an investment destination, nor does the ease at which the Simba Group has been able to abuse the legal system and its institutions to frustrate its lawful creditors. However, we remain faithful and confident that justice will ultimately prevail,” Vintage said.

Last week, a Kampala-based auctioneer advertised three prime properties owned by Mr Bitature for sale, prompting lawyers for the businessman to dismiss the move as “without legal basis”.

Properties listed in the advert run in this newspaper on Wednesday that are to be auctioned include Naguru hilltop Skyz Hotel, which offers a bird’s eye view of Kampala, Elizabeth Royal Apartments in the capital’s upscale Kololo neighbourhood, and Moyo Close Apartments in Bukoto.

But Bitature’s lawyers of Muwema & Co Advocates accused the Vantage lawyers of “misguided and unprofessional conduct…” which “undermines the authority of the courts of law to adjudicate disputes between parties and is also in blatant disregard and contempt of court orders”.

The law firm noted that the legal dispute their client had with the South Africa-based lender was settled on May 9 when High Court Judge Justice Musa Ssekaana ruled that Vantage Mezzanine Fund II Partnership was not duly registered as a partnership in Uganda and, therefore, lacked a legal identity to sue or be sued.

“We wish to inform the general public that the said advert has been issued without any legal basis. It is a malicious advert whose sole purpose is to alarm and cause irreparable damage to our client’s business reputation,” the lawyers noted.